Using x-rays to peer into the human body was a major milestone in modern medicine. Wilhelm Röntgen (German ,1845-1923) discovered the portion of the electromagnetic spectrum that he called “x-rays”. X-ray wavelengths range from 0.1 to 10 Angstroms compared to 4000 to 7000 Angstroms for visible light.

In its simplest form, the wave equation refers to a scalar quantity u that satisfies

where c is a fixed constant equal to the propagation speed of the wave. 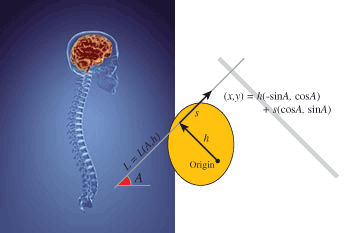 Allan Cormack
(South African, 1924-1998)
laid the mathematical foundation behind what we know as the CAT scan (Computed Axial Tomography). The theory is based on the mathematical question, “can we reconstruct a body if we can compute all of the line integrals that pass through it?”.