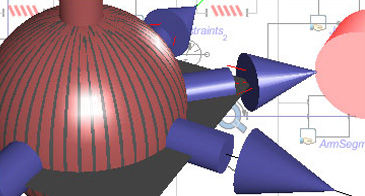 A group of neuroscientists and software engineers at the University of Waterloo’s Computational Neuroscience Research Group (CNRG) have built the world’s largest functional model of the human brain. Named Spaun, the simulated brain has a digital eye which it uses for visual input, and a robotic arm that it uses to draw its responses.

The robotic arm, the output system, is the only motor control system of the model. Researchers used Maplesoft’s simulation and modeling platform, MapleSim, to create the arm. Travis DeWolf, the University of Waterloo researcher who built the arm, attributes the success of the complex arm model to MapleSim’s symbolic computation power and model simplification capabilities.

One of the problems Travis faced at the beginning of his research was that comprehensive models of the human arm were not readily available. However, empirical studies focused on brain research commonly involve having a subject perform various tasks with their arm. Consequently, it was important to have a simulated arm model to test the accuracy of a brain model.

Spaun (Semantic Pointer Architecture Unified Network) consists of 2.5 million simulated neurons, allowing it to perform eight different tasks. Spaun has a 28×28 (784-pixel) digital eye, and a robotic arm which can write on paper. The researchers show it a group of numbers and letters, which Spaun reads into memory, and then another letter or symbol acts as the command, telling Spaun what function to perform. The output of the task is then inscribed by the simulated arm. Using the arm, the brain demonstrates tasks such as copy drawing, counting, memorizing and reproducing sequences, and fluid reasoning.

In an article, Popular Science magazine describes it this way: “The computer program recognizes items, learns and remembers--and even passes some basic components of an IQ test. It’s a major leap in brain simulation, because it’s the first model that can actually emulate behaviors while also modeling the physiology that underlies them.”

Using MapleSim, Travis and the team constructed a 9-muscle, 3-link (shoulder, elbow and wrist) arm model, based on the model presented in a paper by Dr. Kenji Tahara. The muscles in the arm were constructed in MapleSim based on the Hill muscle model. The controller was modeled in MATLAB®, and MapleSim’s connectivity to MATLAB® via the Maple engine, provided seamless integration between the two systems. “We were able to gradually, and very smoothly, increase the complexity of the model using MapleSim,” says Travis. “MapleSim allowed us to easily add in another muscle/link as we progressed, without losing any fidelity. This helped keep the overhead low, and allowed us to focus on developing the control system.”

MapleSim allowed us to easily add in another muscle/link as we progressed, without losing any fidelity. This helped keep the overhead low, and allowed us to focus on developing the control system.

While Travis considered other similar modeling and simulation tools, it was MapleSim’s symbolic computation capabilities that won him over. “In the other modeling software that we looked at, the underlying equations just weren't accessible for analysis,” continues Travis. “With MapleSim, we had access to the symbolic equations driving the system, which meant we could get very accurate descriptions and do extensive analysis of the model. And the equations were automatically simplified in MapleSim, giving us a highly efficient simulation.”

The research goal for Spaun was to evaluate how different scenarios affected the output of the brain system. Other research using this same MapleSim arm model have examined modeling the effects of damage to the brain, caused by blunt trauma, Huntington's disease, and cerebellar abnormalities. The results were compared to real-life patient data to evaluate the accuracy of the model. Having a realistic arm that behaves similarly to an actual arm, with appropriate muscle responses and arm segment lengths and mass, is important to getting accurate results.

Results from this research can be applied to modeling new patient treatments. For example, the effects of deep brain stimulation, i.e., the process of inserting a wire through the brain to send electricity for treating Parkinson's disease, can be modeled in this manner. Having a model such as Spaun will help in more in-depth and accurate investigation before treatment begins. Another application area is the development of neuroprosthetics – better understanding of the motor control systems and the outgoing signals will lead to better functioning prosthetics.

Having completed the Spaun model, Travis is currently working on a learning based model of the motor control system of the brain system, rather than an analytical controller approach. MapleSim is playing an important role in this research because of its easy interface and the highly optimized simulations it provides. The arm simulations that Travis generated for the Spaun model are now being used for the development of other controllers. This will save Travis time and effort in creating new models, as he continues to pursue his world-class research.